Since its inception, MVCO has supported continuous observations of the ocean and atmosphere as well as numerous short term process studies, including the Office of Naval Research-sponsored Coupled Boundary Layer and Air-Sea Transfer program (CBLAST) and the Ocean Horizontal Array Turbulence Study (OHATS), numerous NSF-sponsored experiments on air-sea fluxes, stresses, and exchange, as well as the first successful attempt to directly and simultaneously measure the heat and momentum exchanges on both sides of the air-sea interface.

The Air-Sea Interaction Tower (ASIT), operating since 2003, is the only fixed structure within U.S. coastal waters suitable for detailed studies of air-sea interactions and observations of the exchange of heat, momentum, and gases between the ocean and atmosphere.

The ASIT has served as a national test site for a wide swath of advanced oceanic and atmospheric sensors and sensing platforms since its commissioning. As an example, the ASIT hosted the first successful implementation of high frequency (HF) radar sensing of oceanic surface currents from a fixed, metal, offshore structure, which is now being replicated on oil and gas platforms of opportunity in the Gulf of Mexico. Numerous researchers have utilized the facility for scientific studies or experiments, from critical experiments focusing on the coupled air-sea boundary layer, to more recent efforts relevant to offshore wind energy.   A subset of these are described below: 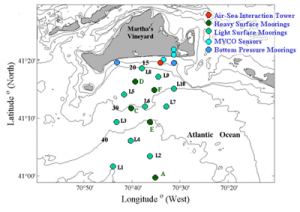 Coupled atmospheric and oceanic boundary layer dynamics were investigated at low wind speeds where processes are driven and/or strongly modulated by thermal forcing. During the intensive operating periods in the summers of 2001 through 2003, investigators collected data near Martha's Vineyard from the Air-Sea Interaction Tower (ASIT), aircraft flights, satellites, mooring arrays, and ship deployments. CBLAST-Low was funded by the Office of Naval Research (ONR) and included participants from the National Oceanic & Atmospheric Administration (NOAA), the University of Washington, Oregon State, Columbia University, the National Center for Atmospheric Research, the Naval Postgraduate School, Johns Hopkins University, the University of Wisconsin, the University of Leeds, and the National Aeronautics and Space Administration (NASA). 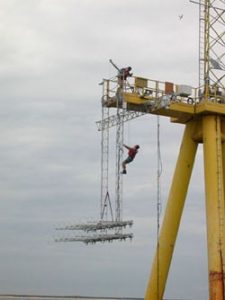 Researchers from WHOI and the National Center for Atmospheric Research (NCAR) deployed an array of sonic anemometers at the Air-Sea Interaction Tower (ASIT) south of Martha's Vineyard to investigate wind-wave interactions and their effects on climate variability. The array, suspended below the 12-meter ASIT platform, was composed of two levels with nine sonics each at about 5 and 5.5 meters (16-17 feet) above mean sea level. Three laser altimeters were also deployed from the platform in a 2-meter triangle to collect information on the underlying wave field. Data collection from these arrays began in early August 2004.
Sponsored by the National Science Foundation (NSF), this project investigated the physical processes that generate and/or modulate the turbulent transfer of momentum, heat, and mass through the atmospheric surface layer. Of primary interest was the influence of wind-generated waves on air-sea fluxes and the marine surface layer. The ultimate goal was to improve how these wave-induced processes are simulated in numerical models. 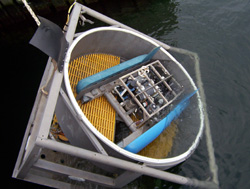 The objectives of the profiling plankton observatory were:

2. To provide preliminary data on the usefulness of a permanent profiling system at the MVCO site. The purpose of this system would be to detect the effects of stratification on the vertical distribution and composition of the plankton community in relation to strong wind events and data from remote sensing platforms. 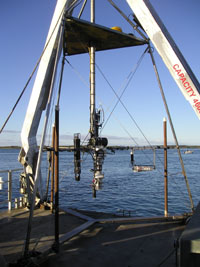 Physical Forcing and Seasonal Variations in Phytoplankton in the Coastal Ocean

The overall objective of this project is to understand the processes controlling the seasonal variability of phytoplankton biomass over the inner shelf off the northeast coast of the United States. 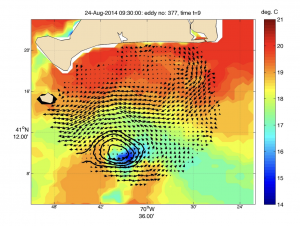 From 2010 to 2014 the Woods Hole Oceanographic Institution (WHOI) operates a system of three medium-range Seasonde HF radars on the southern New England shelf capable of observing the ocean environment at ranges up to 45 km. During the 2010-2012 period, one system was positioned on the top of the ASIT, representing the first successful data collection effort of an HF radar on a fixed offshore structure